Rebecca Rodriguez has two weeks to find a place, and nowhere to go. She is one of about 48,000 California State University students without reliable housing. | By Laura Tsutsui

Rebecca Rodriguez is a student at Sacramento State and is trying to get her teaching credential by May. She’s also looking for a new apartment. Rebecca has to move by the end of the month, and nowhere to go.

She has lived at her apartment with her dog, Penny, for over a year, but her landlord is kicking her out because he wants to make the complex pet-free.

“As a student, you would think with financial aid, plus scholarships and loans, that I should be able to comfortably afford to live somewhere and go to school without having to worry,” Rebecca says. But she is worried.

She says she took out student loans to pay for housing in Sacramento, but she’s finding most landlords won’t accept them as a source of income. The only exception she has found is to pay six months up front, which she can’t afford. 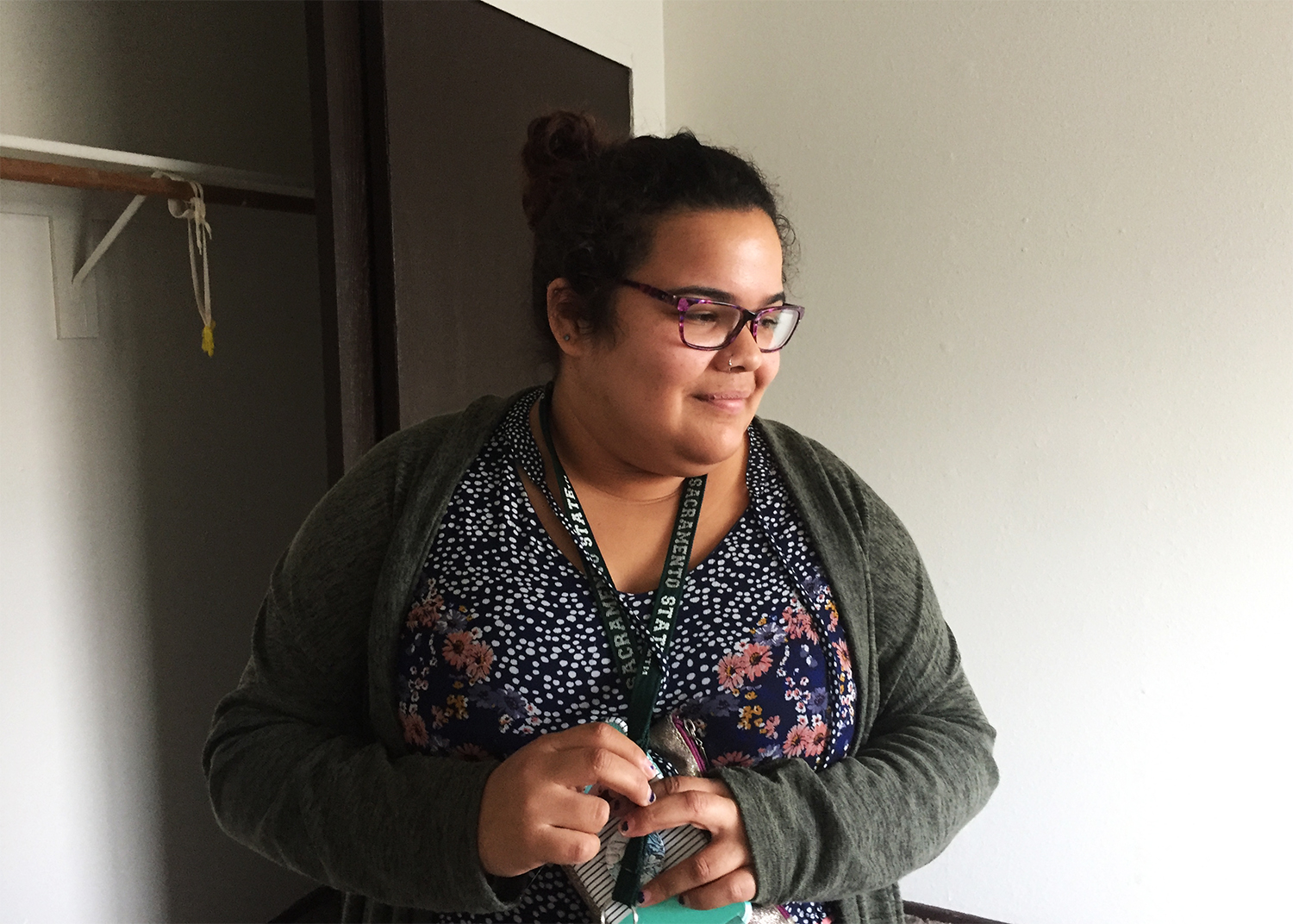 Rebecca Rodriguez looks at a potential apartment in Sacramento. Rodriguez has just two weeks to find a new place to live, but doesn’t feel she has good options. (Laura Tsutsui/Next Generation Radio)

Rebecca is not the only college student in this situation. A California State University study in 2016 found one in 10 CSU students are displaced, meaning they don’t have reliable housing.

Shahera Hyatt of the California Homeless Youth Project says there is currently no comprehensive study on college students across the state. But there are studies that illustrate the prevalence of housing insecurity.

For example, the University of Wisconsin, Madison found that 50 percent of community college students across the nation are housing insecure and 14 percent are homeless.

The CSU study cited FAFSA data that says 56,000 students nationally identify as homeless. The same study indicated that nearly 48,000 students in California alone do not have adequate housing, or are homeless.

Hyatt says the national data doesn’t account for every student because “not every college student fills out FAFSA, or they don’t realize that they are homeless.”

But studies consistently find pervasive housing insecurity among college students, meaning they may be couch-surfing, or, Hyatt says, spending half of their income on rent.

Listen to "Despite Financial Help, Some College Students Can’t Find Housing In Sacramento"

by Laura Tsutsui | Next Generation Radio 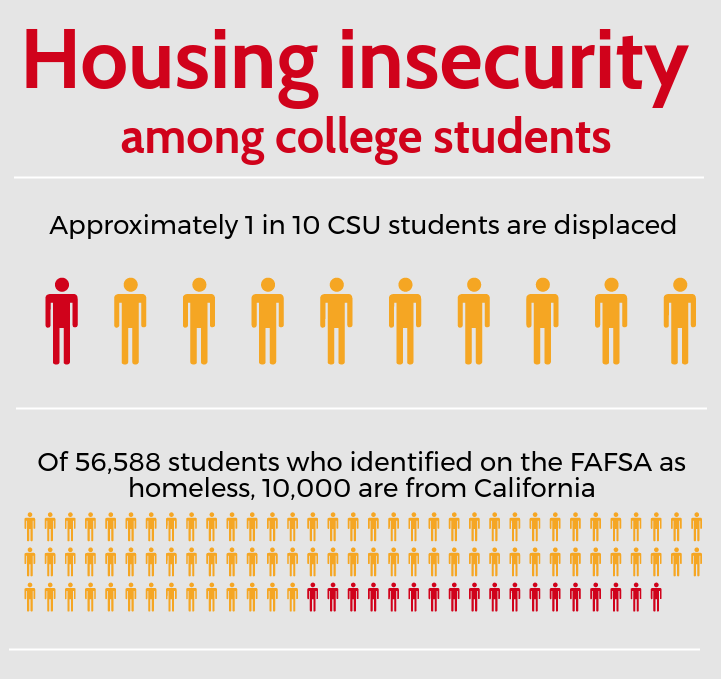 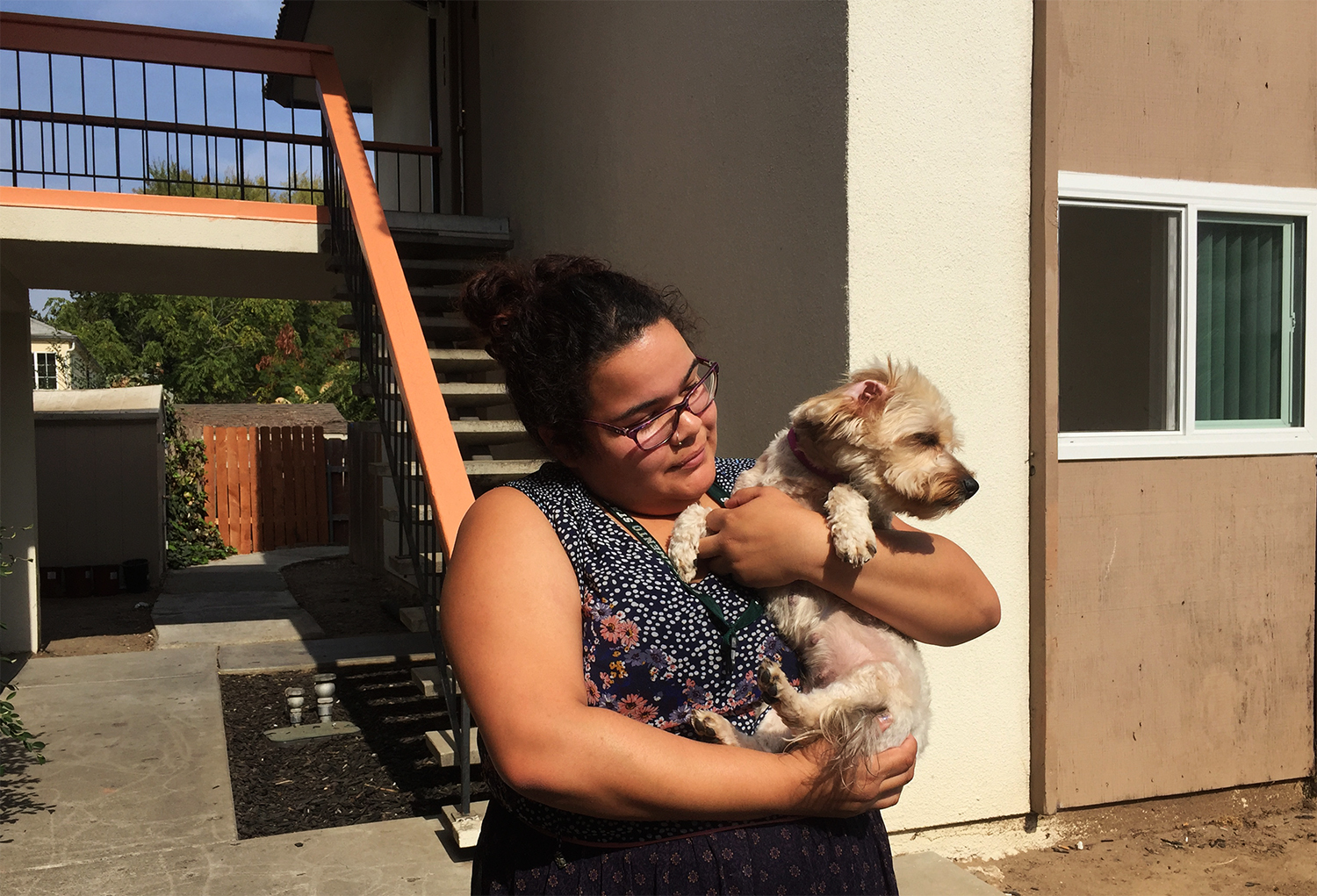 Rebecca has to leave her current apartment because her landlord has stopped allowing dogs to live there. (Laura Tsutsui/Next Generation Radio)

Rebecca has been looking at apartments, but she hasn’t found one where she would feel safe. The places where she would like to live are out of her budget. She’s also up against a 3 percent vacancy rate in Sacramento.

Some landlords take cosigners, but the requirements are too much. Her sister-in-law did the math: She would have to make $10,000 a month just to cosign on an apartment for Rebecca.

“It’s stressful,” Rebecca says. “I’ve literally had nightmares of like, the day before I’m supposed to move out and not having a place to go. It’s so bad.”

Rebecca could pick up a job, but it would be “a disservice to my students and myself if I were to split my attention,” she says.

She has already decided not to give up her dog. Rebecca calls Penny her “emotional support system.”

“The base issue is not the dogs,” Rebecca says. “It’s just finding something I can afford.”

She said she’s going to apply to an apartment she didn’t like, 20 minutes away from her current home, because she says she’s desperate.